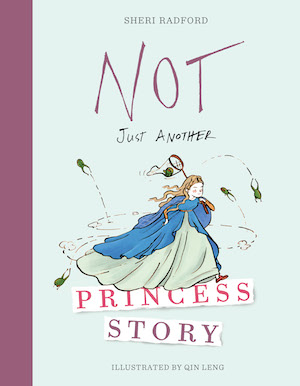 After the king declares it’s time for Princess Candi to get married, the math-loving princess decides to carry out a husband search on her own. Not knowing how to find such a creature, she turns to fairy tales for inspiration and ends up using every method in the books, from kissing frogs to slaying monsters. But will she find her Prince Charming? Or just a bunch of duds who cheat, cry and make armpit noises?

This swashbuckling tale is brimming with romance, algebra problems and at least one very large pickle.

PRAISE FOR THIS BOOK

A February 2015 article titled “The Rise of the Feminist Princesses” on Cuckoo Review calls  the book “a tale that tears apart the stereotypical princess story.” The article praises the story’s “subversion of both the genre and gender expectations.”

A January 2015 review on Readerly says that “kids will enjoy the italicized asides that add to the tale, or correct the extravagant narrator. They’ll also love the unexpected twists, like when Candi kisses a frog and it turns into a bird.”

An October 2014 review on Quill & Quire says of the book: “Eight-year-old sophisticates will probably find it hilarious.” The review concludes: “The lively absurdity of Radford’s text is well-matched by the expressive details and imaginative variety of Leng’s wonderful pictures.”

An October 2014 article titled “Buy the Book” on Vitamin Daily calls Not Just Another Princess Story “just silly enough for a five-year-old to enjoy and perfect for an eight-year-old to read herself.” The review praises how “this princess story breaks new, less trodden ground.”